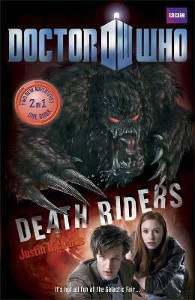 Roots: There are references to Thomas the Tank Engine, Sherlock Holmes, “When the Saints Go Marching In”, “Jerusalem”, and “Land of Hope and Glory”.

Dialogue Triumphs: “Oh come on, you can’t ask us to believe that someone could put themselves into a coma at will so their body can recover from some trauma.”

Continuity: The Drexxons are ape-like carnivores with yellow eyes and retractable claws. The adults are almost five metres tall; the juvenile one seen here is a metre tall. They are incredibly long-lived. They are intelligent, the juvenile controlling Garvo with a neuronic control system. The Drexxons rampaged through the sector of space that includes the Torajii System over a thousand years earlier, attacking planet after planet, killing and destroying. The Combined Stellar Forces led by General Petroval managed to defeat and round them up after a ten year battle and trap them in a Perpetuity Chamber, which is a prison in which time inside is stopped. The Chamber was sealed with a musical key and placed in a vault hidden inside the asteroid that the human colonists named Stanalan. Petroval, a humanoid over seven hundred years old, has stayed on the asteroid to protect the Chamber since it was hidden there. He adopted the alias Perpetual Pete.

Stanalan is a mining asteroid rich in trisilicate and duralinium (Colony in Space). IMC (Colony in Space, Lucifer Rising) owns it. Fluripsent crystals emit a radiant light and are used to illuminate mining tunnels.

The Doctor buys candyfloss and a toffee apple. He has some local currency. He, Amy and Rory have tea and cake at the fair. The Doctor can juggle, but claims he can’t play a musical instrument other than the spoons.

Rory used to have a train set.

There are asteroids in the Mangall System. The Doctor mentions Backwards Bananas and vomit fruit.

Links: There are references to trisilicate and the Doctor sings his Venusian Lullaby (The Curse of Peladon, The Monster of Peladon).

Unrecorded Adventures: The Doctor alludes to an unfortunate incident involving the Queen Mother and vomit fruit.

The Bottom Line: Richards by the numbers with flat characterisation and one-dimensional monsters, but it’s a fast-paced adrenalin ride with some quite witty moments – the kids should enjoy it.

Death Riders
Heart of Stone
System Wipe
The Good, the Bad, and the Alien
The Underwater War
Rain of Terror
Web in Space
Terminal of Despair
Terrible Lizards
Horror of the Space Snakes
Extra Time
The Water Thief