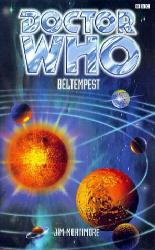 Goofs: It is stated that all twenty-three planets in the Bel system are inhabited except for Belannia II, but neither is the gas giant Belannia XXI.

Dialogue Triumphs: "Nero was mad. Genghis Khan was mad. Hitler was mildly paranoid. I, on the other hand, am merely very, very concerned."

"D'you know, there's nothing quite like the abrupt and violent juxtaposition of the open palm with the facies bucca to facilitate a state of greater mental awareness."

Continuity: Hornrunners are animals native to Belannia II and have six triple-jointed legs and seven horns. Belannia II is inhabited by an intelligent hunter-gatherer species. A triple eclipse transforms the red giant Bel into a main-sequence star. As a result of the changes to the sun, evolution in the Bel system changed direction, with microscopic machine life evolving on Belannia II that can infect human colonists; it becomes trapped in the host, repairing any physical damage and effectively making the host immortal. One hundred thousand years later, the surface of Belannia II is covered in lava fields and the atmosphere is toxic. All twenty-three worlds in the Bel system are inhabited by human colonists, except for Belannia II, Belannia I (which is too close to the sun) and the medium-sized gas giant Belannia XXI, which is used as a waste dump; the planet has three large moons, but its radiation belt makes them too dangerous for colonisation or mining. Belannia VIII is the capital world of the system. The moon of Belannia VI is airless. Farnham's World is the largest of three habitable bodies orbiting Belannia XII and has been colonised. Belannia X has a single orbiting planetary body. One of the other moons of Belannia XII is unnamed and covered in ice and water: shark-like creatures live in the semi-frozen oceans. There is a city on the moon of Belannia IV's moon, which is destroyed when the moon disintegrates. The Endless State is a suicide cult. Quarnday is the name of one of the weekdays in the Bel system. The Doctor's gravitic stabilisers allow the seeker in Bel to be born without completely destroying the system, saving many of the planets and billions of colonists: the energy released also allows the micromachine life forms to leave their hosts and live independently.

As well as humans, other species living in the Bel system include the Hanakoi and the Hoth. The Hanakoi have no ears and have human-like motivation. They built many of the cities on Belannia VIII now inhabited by humans. The Hoth live in the atmospheres of the gas giants and have had little contact with humans, whom they treat with hostility. They are empathic and originated in the atmospheric oceans of Belannia XII during the first lifetime of the Bel system. They colonised the outer gas giants of the system whilst their species was less than two million years old. They live for millennia and have dirigible bodies the size of small continents: by the time of the events seen here, there are only five left.

The seekers are planet-like beings that live for billions of years and dwell in the depths of Deep Time, wandering between galaxies. They lay their planet-sized seeds in stars. Little is known about them. The birth of their embryos destroys the host star, and thus the accompanying solar system. One hundred thousand years ago, a mating triad of seekers seeded Bel, transforming it back into a main-sequence star in the process; the colonists' dumping of toxic waste into the sun has disrupted the process of gestation, and the Doctor hypothesises that a stillbirth would cause a supernova.

The Doctor reads James White's Hospital Station and Dr Seuss' Green Eggs and Ham and listens to Louis Armstrong's "We Have All the Time in the World". He evades questions from Sam about his family, but implies that he has parents. He is injected with a tranquiliser on the moon of Belannia IV, which has a delayed effect on him. He claims [possibly facetiously] that he once did a two-week apprenticeship at Kwik-Fit.

Sam wants to have children at some point. She throws the Doctor's Gladstone bag into a pond on Belannia VIII. She isn't religious and doesn't believe in an afterlife. She dislikes ham because her mother packed ham sandwiches for her school lunch every day until she was eight years old. The micro-machine life infects her in the Bel system, healing any wounds she receives [presumably it leaves her when the seeker in Bel is born, or she'd be immortal...].

There is a beach (and a sea) in the TARDIS. There is a gravitic stabiliser in the TARDIS that the Doctor places into orbit around Belannia VIII to protect the planet from Bel's gravity fluctuations.

Unrecorded Adventures: The Doctor has watched performances of Puccini's Madame Butterfly in Paris or Chandrasekhar City on Alpha Leonis Seven. It is such a perfect musical statement that it was simultaneously written on at least seven different worlds, including Larksup's World in the lesser Magellanic cloud, which the Doctor may have visited, having collected various editions of the piece at one time.

The Bottom Line: "Unless I can find out what's wrong with the sun and make it right, everyone within five thousand astronomical units or so is going to die." Despite the usual death on a biblical scale, Beltempest is Mortimore's most optimistic novel, with the Doctor saving billions of lives and facilitating the birth of an unimaginably rare being of cosmic proportions. Sam gets plenty to do, without being annoying.