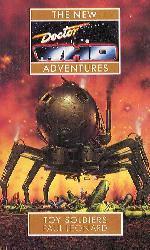 Roots: World War One, and the horrors of war in general. There are references to Picasso, Nelson Mandela, Jules Verne, and The Wizard of Oz.

Continuity: The Q'ell are insectoid creatures with compound eyes and are native to the planet of the same name. They have limited psionic powers. They built the Recruiter to destroy the Ceracai, with whom they were at war. The Recruiter orchestrated a war on Q'ell between two opposing sides both of which it controls, believing that war is the best way to accelerate technological advance to the point where it has the technology to leave the planet and go and destroy the Ceracai. Soldiers have been recruited for the war from other species brought to Q'ell using a mm'x synchronisis intradimensional energizer and placed under the mental control of the Recruiter using implants. It has been recruiting human children on the grounds that children make the best soldiers because they kill "without compunction." The war on Q'ell has been fought for fourteen hundred and five Q'ell years and has cost two billion, eight hundred and forty six million, fourteen thousand and thirty-two lives. The Ceracai live half a galaxy away and haven't fought a serious war for centuries. Amongst the species recruited to fight in the war on Q'ell are humans, Ajeesks, Kreetas, Biune, and Ogrons (Day of the Daleks, Frontier in Space, The Romance of Crime) [there is also an Ice Warrior on the front cover]. Kreetania is an arctic world. Biune are two and a half metre tall humanoid bear-like creatures with three fingers and a thumb on each paw, and green eyes without pupils. Biune names always have two parts; a glottal expletive and a softer sound made with an intake of breath. They are a peaceful meditative race that has no word for "war" in their own language. Kreeta are blue skinned with huge black eyes and long multi-jointed fingers. Ajeesks are rabbit-like, with fur and long noses. The state of the war on Q'ell is such that combatants are forced to eat the bodies of their enemies.

The Doctor gives Edi an anachronistic Sainsbury's pie and some rye bread. He runs Doctor Smith's - Pies For All as a cover in London in 1919. He produces an orange washcloth and a bottle of Jif from his hat on Q'ell. He keeps sweets in his pocket.

Benny works undercover at Universal Toys, wearing the obligatory uniform of blue-striped cotton dress and cheap lace collar. She unwisely attempts to adopt the local accent whilst working there. She is abducted to Q'ell and recruited, two implants placed in her forehead, which leaves scars. These connect her mind to the Recruiter, and effectively brainwash her into being a loyal soldier. She becomes Sergeant-Recruiter Bernice Summerfield and wears the red and yellow uniform associated with the rank. She manages to overcome her programming and remember who she is. She gets a nasty cut on her forehead in the Recruiter's Citadel.

Roz dresses in loose-fitting black laserproofed trousers, a dull red woolen jacket, and leather springerboots. She wears a bulletproof vest under her jumper. Whilst working undercover in France in 1919, she and Chris claim to be American private investigators working for a Scottish Doctor living in Paris. To her astonishment and horror, Roz experiences racism in France. She gets shot in the leg, receiving an injury but escaping serious harm due to her trousers.

Chris wears a formal twentieth century morning suit whilst in France. He carries a field medikit containing a hyperadrenalin spray, some plastaforms, and a couple of programmable viruses. The kit has a CAT scanner. Chris once flew a solar-powered Zlifon box-kite and gets to fly a biplane here.

Chris unwisely tries to send the TARDIS back in time but not space, threatening to make it materialize inside itself and causing the Cloister Bell to ring (Logopolis, Castrovalva).

Links: Benny thinks about Oolian brandy chasers (Original Sin) and remembers Zamper (Zamper). There is a reference to Artron energy (The Deadly Assassin, Four to Doomsday).

Unrecorded Adventures: The TARDIS spends two weeks ferrying the survivors of the war Q'ell back to their homeworlds, including Earth, the Ogron homeworld, and Kreetania.

The Bottom Line: 'All you've got is an army of toy soldiers. They're sentient beings, but you've turned them into machines. They kill each other endlessly and don't even care why they're doing it.' Probably Leonard's most forgettable book, Toy Soldiers is nevertheless an effectively harrowing look at the futility of war. Roz's experiences with racism, forcing her to at least glance at her own xenophobia, add extra interest.