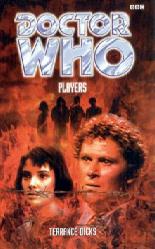 Continuity: The notorious Season 6b theory is confirmed - following his trial at the end of The War Games, the Doctor was recruited by "less scrupulous Time Lords" [the CIA] to carry out tasks for them before his actual sentence was carried out and he was exiled to Earth. Before he would agree to work for them however, he insisted on seeing proof that all of the victims of the Aliens were restored to their proper times and places and was sent to Earth to see that Carstairs and Lady Jennifer had been returned. He was transported there by a temporal transference beam and was given a Time Ring to allow him to return (see Genesis of the Daleks - on this occasion, the Time Ring cannot be removed).

The Players are time travellers and shape-shifters. They are also very long lived. The Countess states that they have travelled through time so much and lived so long that they can no longer remember what they are or where they are from. They play the Game to amuse themselves throughout eternity [perhaps they are Eternals - see Enlightenment]. They have altered history extensively, and have seen past and future altering around them. They can be killed whilst in human form on Earth. "Trust nobody" is the first precept of the Game.

The Doctor carries a Gallifreyan army knife. When he and Peri mistakenly arrive in South Africa during the Boer war, he is wearing top hat and tails. He briefly adopts the alias of Professor Erasmus Potgeiter of Pretoria Scientific Institute. He later pretends to be his own son whilst encountering Churchill again in London, 1936. Whilst in London in 1936, he dons a dark-blue three-piece suit with a slight pinstripe, white shirt and regimental tie, yellow kid gloves, a walking stick, and a grey Homburg hat with a black band. He later wears a green tweed suit.

Peri says that Perpugilliam is an old family name. During the course of this novel, she also changes costume several times, including a Grecian-style gown in heavy white silk with a jewelled brooch at the shoulder, a long skirt and severe jacket chosen by the Doctor, a black coat and skirt with a grey silk blouse and a wide-brimmed hat, and a simple black suit by Coco Chanel.

The Doctor repairs the TARDIS spatial circuits. The TARDIS can enter a parking orbit in the space-time continuum, and be summoned back to pick up the Doctor by a control in the Doctor's pocket watch (see Timewyrm: Exodus). The food machine can produce a hamburger and cola [as opposed to food bars - the Doctor has made improvements since The Daleks]. The Doctor still has the thought scanner that he used to show Zoe his most recent encounter with the Daleks when she first boarded the TARDIS (The Evil of the Daleks, The Wheel in Space). The Doctor has a study in the TARDIS, with oak panelling, lined with bookshelves, and with a coal fire, in which he has a huge mahogany desk.

The Second Doctor always carries a few Chinese firecrackers with him (see The Five Doctors). He wears evening dress whilst at the Chateau. He no longer smokes (see An Unearthly Child).

Lady Jennifer (The War Games) is a distant relation of Churchill's. She and Carstairs married after the war, and she stopped using her title. Carstairs joined Churchill's staff and later stayed on in the army, joining Military Intelligence.

Tom Dekker returns, and refers to the events of Blood Harvest. He also mentions Ace. Following Capone's imprisonment, he grew bored with Chicago and took a job with the Pinkerton Agency, working all over the USA for them, before they put him in charge of their London office.

Rigel Seven is a planet with rich fertile soil and heavy rainfall, and therefore lots of mud. The Rigellans worship mud, considering it to be the primal ooze from which all life springs.

Links: Peri complains about "lousy caves" (The Caves of Androzani), "paranoid gastropods" (The Twin Dilemma), Cybermen (Attack of the Cybermen) and "a Punishment Dome dedicated to torture and death" (Vengeance on Varos). The Doctor considers taking her to Metebelis Three, but then recalls that visits there rarely turn out well (The Green Death, Planet of the Spiders). The Second Doctor segment takes place after The War Games and there is a reference to Jamie. Martin Bormann, concerned about Hitler's instability, telephones psychic consultant Dr. Kreigsleiter (Timewyrm: Exodus).

Unrecorded Adventures: The Doctor has visited Rigel Seven before - on that occasion he helped King Adelebert put down a palace revolution and was considered a national hero. He also designed the sewerage system beneath the palace. The novel starts with the Doctor and Peri escaping from the dungeons, having been incarcerated by the now-late Adelebert's son, a "nasty, vindictive lad". The Doctor knew Custer. He once met Dracula (see Goth Opera). The Doctor visited the Duke of Wellington in 1861 to congratulate him on Waterloo, and cleaned up at faro at a gambling den. The following day, he went to see Prinny, who suggested that he deposited it with a friend who had just opened Chumley's Bank. The Doctor set up an account for use of himself and his direct descendants in perpetuity (i.e. other incarnations). He once helped the President of Santa Esmerelda quash a revolution, gave him some advice on lowering taxes and establishing a health service - in return, the President made him Honorary Consul to Great Britain for life. He met King Charles II.

The Bottom Line: Simply dire. Another glorified Target Novelisation from Dicks, with a wafer-thin plot, poor characterisation, and his recurring theme of having the Doctor meet a famous historical person. Dicks' oft-quoted practice of writing for all the Doctors in the same way has never been so exposed as ludicrous than in the comparison between Doctors Two and Six seen here; the Second Doctor is barely imaginable as Troughton. At least the Season 6B concept is visited for the first time in the novels, opening new possibilities for Second Doctor solo novels. All-in-all, the best thing that can be said about Players is that it's better than Catastrophea.

This can now be considered a "recorded adventure". In classic Dicks fashion, it was mopped up by World Game quite neatly in the epilogue.

"The Doctor visited the Duke of Wellington in 1861 to congratulate him on Waterloo, and cleaned up at faro at a gambling den. The following day, he went to see Prinny, who suggested that he deposited it with a friend who had just opened Chumley's Bank. The Doctor set up an account for use of himself and his direct descendants in perpetuity (i.e. other incarnations)."