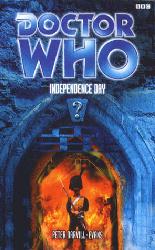 Roots: The uniforms worn by Kedin and his men remind Ace of The Charge of the Light Brigade.

Continuity: Most of Mendeb Two is too hot for human habitation - the colonists live on the island archipelagos at the poles. The TAM Corporation left a sophisticated communications system with a communication centre at the equator to link the polar regions, but then a key component was accidentally borrowed by the Second Doctor and Jamie during a previous visit. Because of this, the colony was left fragmented, slowing its development and leaving its people vulnerable to the invasion from Mendeb Three. Mendeb Three is more Earth-like, but is further away from the sun - consequently, only the equatorial region is habitable, the poles being covered by extensive ice caps. All three continents are located along the equator.

Spore-weed is a plant indigenous to Mendeb Three. Its seeds are smoked to produce a narcotic effect. SS10 is the tenth distillate prepared from spore-seeds by Vethran's scientists with the addition of heat and other chemicals. It contains components that act as a sedative and induce susceptibility. Its main active component affects the hypothalamus, where it causes cells to produce a secondary agent that cauterises nerve endings. The area of the hypothalamus responsible for free will becomes useless. The victims are left with no mind or volition of their own, but are compliant and can carry out menial tasks. The effects on humans are permanent, although the Doctor leaves behind cell culture kits to allow Kedin's people to grow new cells from the slaves' stem cells, in the hope that this will provide at least a partial recovery. Kedin's substitute formula, which causes only temporary effects, is derived from SS8.

The islands on Mendeb Two have giant cycads and fish called Krake. Species indigenous to Mendeb Three include needle trees, lizardwings, bile worms, and Camelopes. In addition, they have silk and tea, which must have been brought by the colonists. They also have mules, suggesting that they have horses and donkeys [unless their "mules" are hald camelope].

The TARDIS predicts that by the time the Seventh Doctor and Ace arrive, both civilisations will have become redeveloped and will be using the space station as a trading point. Thanks to the Doctor's accidental theft of the communications device, this is of course not the case. The TARDIS has at least twelve levels.

The Doctor notes that his early incarnations did not always have a sound understanding of the workings of the TARDIS. He is immune to SS10 and performs a biochemical analysis of it by drinking it. Vethran forces him to ingest bile worm venom, which corrupts the internal organs and causes rapid death in humans - he survives, but is forced to put himself into a recuperative coma with only one heart beating, and has to regenerate most of his internal organs. He lifts the communications device from Mendeb Two with ease, even though Ace finds it very heavy. He later bends a gun barrel to demonstrate his usefulness as a slave. He has excellent night vision, and during the week long journey with the slave army, he doesn't sleep, shave, wash or change his clothes, but remains looking fresh. He carries a hip flask full of a nutrient broth, which is on a permanent link with the TARDIS food synthesiser so that it never empties.

Prior to arriving in the Mendeb system, Ace has been in the TARDIS for two days without seeing the Doctor. She has redecorated her room, turning one wall of shelves into an armoury. In Perivale, she had posters of Adam Ant, George Michael, Jesus and Mary Chain and Primal Scream. The last film she saw at the cinema before she wound up on Iceworld was Withnail and I - she developed a crush on Richard E. Grant. She has sex with Kedin, and almost remains on Mendeb Three to stay with him. She has obtained a new baseball bat.

Independence Day takes place between Survival and Love and War. Given Ace's increasing independence from the Doctor, self-confidence and expertise with weaponry, I hypothesise that it occurs after theCat's Cradle trilogy. Since she nearly stays on Mendeb Three, and since the Doctor ends this story blaming himself for what happened, it is likely that this story takes place immediately prior to Nightshade, in which he is curiously despondent at the start and prevents Ace from remaining with Robin Yeadon.

Links: The Doctor says that the yeast used to make bread on Mendeb Three might prove dangerous to Sontaran physiognomy. Ace recalls defeating Daleks and Cybermen with a baseball bat and gold, respectively (Remembrance of the Daleks and Silver Nemesis). The Doctor notes that the ruler of Chloris once had him arrested and thrown into a pit, without much success (The Creature from the Pit).

Location: Mendeb Two and Three and the space station, over a week circa 2950AD.

Future History: The Mendeb system was colonised by the TAM Corporation, described by the Doctor as a "particularly rapacious and unscrupulous bunch". They established colonies on Mendeb Two and Three, but during the [Galactic] wars they and most of the other big corporations had virtually all of their interstellar ships requisitioned; they abandoned the colony, leaving a communications network and a space station between the two planets. Four hundred years later, the planets had become entirely separate colonies, each unaware of the other's existence. They referred to the orbiting space station, visible in the night sky, as the Moonstar. Mendeb Two became a society of fishermen and farmers. Mendeb Three, thanks to its larger landmasses, adopted a misogynistic feudal society, with Duchies and Counties. A decade before the Doctor and Ace arrived scientists including Kedin Ashar had begun to rediscover their origins and invented projectile weapons and the internal combustion engine. Armed with this equipment, Duke Vethran of Gonfallon began to expand his territories. Within ten years, he had declared himself King. By now, Kedin Ashar and his partner Tevana Roslod had grown unsettled by Vethran's acquisitive nature, but were forced to continue aiding him until they were in a strong enough position to lead a rebellion. By now, Kedin had rediscovered the principles of manned flight and eventually reached the Space Station, where they discovered shuttles and more powerful weapons. Vethran, feeling the need to expand further, ordered him to invade Mendeb Two and enslave its population, bringing them to Mendeb Three to serve them. His own scientists developed SS10 to control the slaves. Eventually, the rebellion was launched and Vethran overthrown - he was fed SS10 by Ace, and left with no will of his own. Kedin was appointed leader of the Grand Council, and went on to govern Mendeb Three. Slaves from Mendeb Two were freed and sent home.

The Bottom Line: A straightforward plot is made memorable by the insidious horror of the effects of SS10, and issues such as coping with the loss of loved-ones. The ending is particularly bleak, with Bep-Wor's suicide an almost tear-jerking moment.