The Algebra of Ice 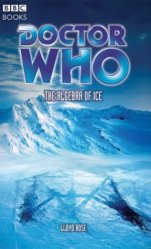 Goofs: The Doctor implies that Gallifrey is located in a different galaxy from Earth, which contradicts various sources, including Warmonger. The TARDIS walls are patterned with hexagons, rather than the usual roundels [the Doctor might have been experimenting with the architectural configuration, but if he has then it's rather a coincidence that aliens who can't cope with circles, should invade the TARDIS whilst he's doing so].

The Doctor tells Ethan that he can't leave him in the future because he'll be alive when he shouldn't be, which is clearly at odds with numerous previous stories, most notably The Savages and Dragonfire.

Dialogue Triumphs: "I don't know what's going on. But I want to. Don't you understand? Sitting in this room, we're on the edge of the transcendent. The Doctor is immortal and lives among the stars. Haven't you worked out how that's wonderful and miraculous?"

"Morality has its equations too - they graph the curve of compassion between the quick and the dead."

Continuity: The aliens are from a different universe, which is almost drained of energy. They have evolved into a purely mathematical, near-static form of being. They drain planets and stars to maintain their anti-entropic state, and are both individual and a hive-mind, forming a Bose-Einstein condensation. They/it know that the Doctor destroyed Skaro (Remembrance of the Daleks). Because they/it are made of equations, the Doctor is able to destroy them by tweaking the equations so that the answer becomes zero.

The Doctor is of the opinion that his Third and Fourth incarnations didn't look too bad. He admits that he'd like to be really handsome at some point, purely out of vanity. He has blue eyes. He wears his cream suit here. The Brigadier persuades him to carry a pager, but not a mobile phone. The Doctor's failure to destroy the Daleks in Genesis of the Daleks haunted him enough to prompt him to destroy them utterly when given a second chance; he now feels guilty about destroying an entire world (Remembrance of the Daleks). He again uses the alias John Smith. He drinks orange juice. Bach is one of his favourite composers. He notes that his eyes are essentially human (The TV Movie). He builds small constructions of wire, metal and glass, some with gears or antennae, when he is concentrating on a problem; he tends to leave these lying around the TARDIS. He rents a car whilst in Switzerland. He carries a small laser shaped like a penlight. He also carries a yo-yo and a soup tin lid. His pockets contain a Wodehouse paperback, a pair of spoons, and an item that he can't identify. At one point, he produces a cup from his pocket (see The Power of Kroll). He serves buttered toast and honey to Ace and Ethan for breakfast.

Ace read Edgar Allen Poe's The Tell-Tale Heart in school; he was one of the few writers she liked. She drinks hot chocolate. The Doctor provides her with a driving license, which she promptly loses. Ace enjoys breaking and entering and likes getting an excuse to do so in the name of "right". She carries a set of lock picks. Ace changes into jeans and a jumper whilst at the house in Allen Road. She tries to convince Molecross that the Doctor is her uncle and sells cheese for a living. She enters into a sexual relationship with Ethan Amberglass and returns to visit him every so often for one of her years and four of his, before he collapses into a coma due to a brain tumour. She likes beer and gets drunk here. She used to have a pet mouse.

The Brigadier seems to have returned to active duty following the events of Battlefield. He hasn't yet got used to the Doctor's Seventh incarnation, and considers it to be the gravest of the ones he's met. The Brigadier dislikes being interrupted during the first half hour of the morning, during which has a quiet cup of coffee and sorts out any work left over from the previous day. He is familiar with the Doctor's house at Allen Road. UNIT's current HQ was carefully sited away from A-roads, down in a dell, to make it unobtrusive.

The Doctor is connected to the TARDIS by transcendent biomechanics. The TARDIS makes regular update connections to the data banks on Gallifrey. A TARDIS manual can be accessed from the console by pressing a button marked "Manual". The door lever is not computerized, but a completely mechanical device. The TARDIS generators consist of old-fashioned looking machinery with buttons, lights and metres. The generator room contains an Artron Energy Capacitor, located behind a door with a small ruby-coloured window. The TARDIS contains a small cosy den with a fireplace. There is a collection of Poe's stories in the TARDIS library, as well as a holograph book of the canyons of Cevitor, Newton's notes for his Principia, several Shakespeare manuscripts, scrolls rescued from the Alexandria Library, some of Napoleon's hand-written battle plans, a notebook of pencil sketches by Goya, and handwritten scores by Mozart. The food-machine room has a kitchen annex. It is implied that the TARDIS contains more than one toilet. Ace finds a pile of coats in the TARDIS, along with the Fourth Doctor's hat. A room in the TARDIS contains a Bosendorfer grand piano. There is a room containing numerous computer stations, with a huge monitor covering one wall. The food machine makes Bourneville Fruit and Nut bars on demand. The Doctor's house at Allen Road contains a painting by Constable, but no portraits or photographs. The Doctor keeps Darjeeling and Earl Grey tea in the kitchen.

Adrian Molecross publishes conspiracy theory webzine Molecross's Miscellany of the Mysterious and Misunderstood. He has heard stories about the Doctor and knows that he has a double pulse.

Sin is an unknown concept on Gallifrey. The Time Lords don't yet have the technology to allow humans to re-grow lost limbs. The Edreki are green.

Links: Ace knows the Brigadier and there are references to Fenric, setting this story after both Battlefield and The Curse of Fenric. There is an implication that UNIT incarcerated Morgaine and Mordred in a super-security prison (see Human Nature (book)). Ace refers to Daleks and as a result of the alterations to history I. M. Foreman is spelt Forman on the junkyard gates, something that the Doctor noticed during the events of Remembrance of the Daleks. Ace recounts her first meeting with the Doctor (Dragonfire). The Doctor's house on Allen Road was first seen in Cat's Cradle: Warheadf. There is a reference to Yetis in the underground (The Web of Fear). The Doctor tells Molecross that mankind won't like what it finds at the centre of the Earth (Inferno). It is implied that Ace knows that the Time Lords reproduce using woven DNA (Lungbarrow).

When the Doctor visits Ethan, he tells him that he has just visited both his own mind and the moon, meaning that for Ace a year passes between this story and Timewyrm: Revelation.

The Doctor notes that he hasn't destroyed his own planet, with Brett remarking, "Well, it's early days yet. They say the second crime is always easier", which is a nod to The Ancestor Cell. Later, he muses that he sometimes wishes that he could have his memory wiped clean and start afresh, which foreshadows The Burning.

Unrecorded Adventures: The Doctor and Ace recently visited a green-skied planet containing nothing but weird looking orange groves, and a planet of marmots, which the Doctor described as "humble". The Doctor has met Isaac Newton, whom he describes as "difficult". He once visited a tourist attraction on the Jungfrau.

The Bottom Line: The mathematics is apparently rubbish, but for any readers not qualified enough to notice, The Algebra of Ice is a wistful, lyrical tribute to the New Adventures, with some beautifully crafted characters and a moving final chapter.